One was “The Bridge in the Rain” and the other “Plum Tree in Bloom” Van Gogh’s fascination with Japanese prints continued to influence some of his paintings to the end of his life.

From 1639 AD to 1853 AD Japan closed its doors to communication and commerce with all outsiders, particularly of the western world, but with the exception of Holland and Germany. This period was known as the ‘Tokugawa Seclusion’. Shipbuilding was discontinued and Japanese citizens rarely visited other countries. However, the U.S.A saw the lucrative potential of a fully functioning trade system that included Japan. To encourage japan to once again open its borders to international trade the U.S.A, in 1853, sent Commodore Mathew Perry and his ‘Black Ships’ , 4 steam driven war ships, into Edo Bay. Japanese leaders had never before seen such a display of naval power and after discussions were held with the Bakufu, agreed to sign the ‘ Treaty of Peace and Amity’  on March31,  1854 (also known as the  ‘ Treaty of Kanagawa’). 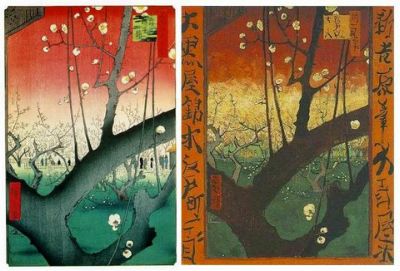 Under this treaty, Japan opened two ports, Shimoda and Hakodate, to U.S. ships seeking fuel and fresh provisions. It also guaranteed good care and safety for shipwrecked American sailors and a U.S. consul was allowed to stay in Shimoda. Soon after the ‘Treaty of Kanagawa’, the British, Russians, Dutch and French signed treaties with Japan. Thus ended the period of seclusion for Japan and saw the beginning of the era of Japonisme.