'Sky Tree' is the name given to a new digital t.v. broadcast tower being erected in Tokyo. The tower will be completed in 2011 and will be 634 metres high (yes ,that's 634 metres!) making it the tallest free-standing tower in the world and the tallest man-made tower in Japan. This structure has brought increased tourism and development to the immediate area.

On the downside, residents have to cope with increased traffic caused by tourist and construction vehicles. The improved tourist spending is welcome of course. The re-routing of traffic to nearby roads has however caused an increase in traffic accidents.

On the brighter side, because of the now high interest in Sumida Ward,home of the new tower (and Asahi brewerie), authorities are accepting applications from educational institutions for the siting of a new university in the ward. This four or six year university will bring in a large new population of young students and the benefits they will bring with them will be welcome."Sky Tree" is a popular subject for both professional and amateur photographers. It was also chosen as a subject for  New Years' post cards. Photo at left shows height at 559 Metres.

But wait .....many of you will remember with wonder your first visit to the other Tokyo Tower. So let's go back some 50 years shall we as 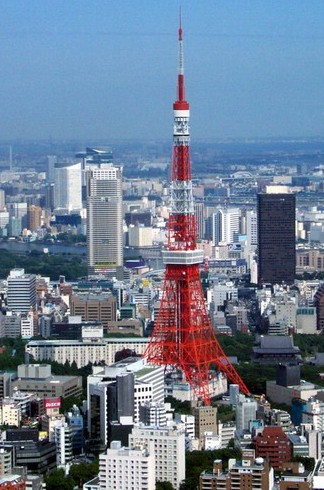 Tokyo awaited the official opening of that tower in October 1958.

Here are some facts and figures from that amazing time: