The Legend of Fishers’ Ghost 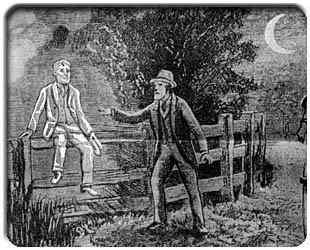 You couldn’t be a resident of Campbelltown today and not know about Fishers’Ghost! So, 175 years on, let’s visit the story once again.

In June 1826 Frederick Fisher, a Campbelltown resident, disappeared and was never seen again. Four months later, John Farley, a well known farmer in the district, burst into the local hotel in a state of shock announcing that he had just seen the ghost of Fred Fisher.

Farley said he had seen Fisher’s ghost sitting on a bridge and pointing to a nearby field.

Police later found Fisher’s body in that field in the same spot where Farley said the ghost was pointing.

Born in England in 1792, Fisher was sentenced to fourteen years ‘Transportation’ (‘Transportation’ was the sending of convicted criminals to English penal colonies around the world at this time) to Australia in 1815 for allegedly forging bank notes. In 1822 he was given a ‘Ticket of Leave’ (a document convicts were given allowing them to live, work and buy property in a restricted area in the new colony before they had finished their sentence or were pardoned). He then bought the farm in Campbelltown. William George Worrall, well known and respectable, was Fisher’s neighbour.

Three years after Fisher bought his property he had an argument over money with the carpenter William Brooker. This resulted in a physical confrontation and Fisher attacked Brooker with a knife receiving a short prison sentence for his actions. While he was serving this gaol term Fisher gave Worrall his power-of-attorney because he was worried about his property.

After finishing his gaol term Fisher returned to town and promptly disappeared on June 17, 1826. George Worrall said Fisher had returned to England because he was worried about another police charge made against him. Worrall sold Fishers’ personal belongings,   including his horses a month later. He claimed Fisher had sold them to him. In September 1826, however, Worrall was arrested and charged with Fishers’ murder though he claimed others had committed the murder, not him!

In October, 1826, two boys were walking across Fishers’ farm and found blood stains on a fence and a tooth and a lock of hair as well. An Aboriginal tracker was called in and he found Fishers’ body in a shallow grave near by.

George Worrall was subsequently tried, found guilty and sentenced to death by hanging on February, 5, 1827. On this day Worrall confessed to the murder of Fisher but he said he thought Fisher was a horse in the wheat field … go figure?

Well, that’s the ‘legend’ … after all those years, still going strong! 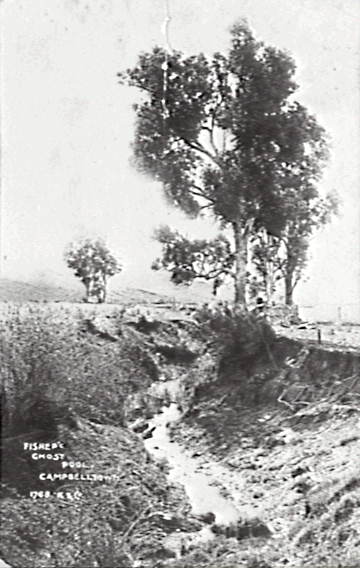 What are the facts really? Court records dot not mention the ghost for instance. Was Farley involved in the concealment of Fishers’ body as some people believed?

What we do know is that the ‘Fishers Ghost Legend’ gives the south-western city of Campbelltown, in metropolitan Sydney, the happy task of hosting the Fishers’ Ghost Festival in November each year.

The festival is held to celebrate an early piece of Australian colonial history combined with (?)maybe, a generous amount of folklore!

It is rumoured that if you look very carefully during the street parade of the abovementioned festival you may see, if you’re very, very lucky …… a fleeting glimpse of a certain ghost?